Letter from the Editor

What teen magazines taught me 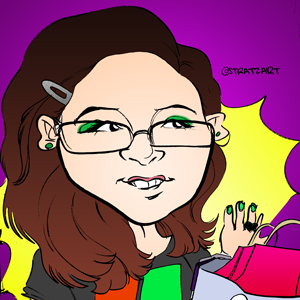 I love magazines. To this day, I subscribe to a number of print periodicals covering politics, fashion and technology. Teen magazines are what birthed this love of print publications and, even though I've moved on to slightly more grown-up titles, teen magazine media made a lasting impact on me and still holds a special place in my heart.

In the days before the internet, teen magazines were my earliest introduction to pop culture and one of my earliest experiences of lifestyle aspiration. That aspirational aspect has been criticized for giving young people unrealistic standards that could lead to low self-esteem and promoted shallow consumerism.

I, of course, was not immune to some of these negative effects. But at their best, those glossy images provided a glimpse into more pleasant possibilities for my life that I wouldn't have been able to imagine otherwise. And it's why I still have a soft spot for them today.

My love of teen magazines started when I would steal my older sister's issues of Seventeen. I loved the fashion and makeup pictorials, and as a pre-teen, I was fascinated by the peek into teenage life the magazines provided. As I got older, and started developing my own interest in celebrities, I convinced my parents to get me a subscription to Teen People. 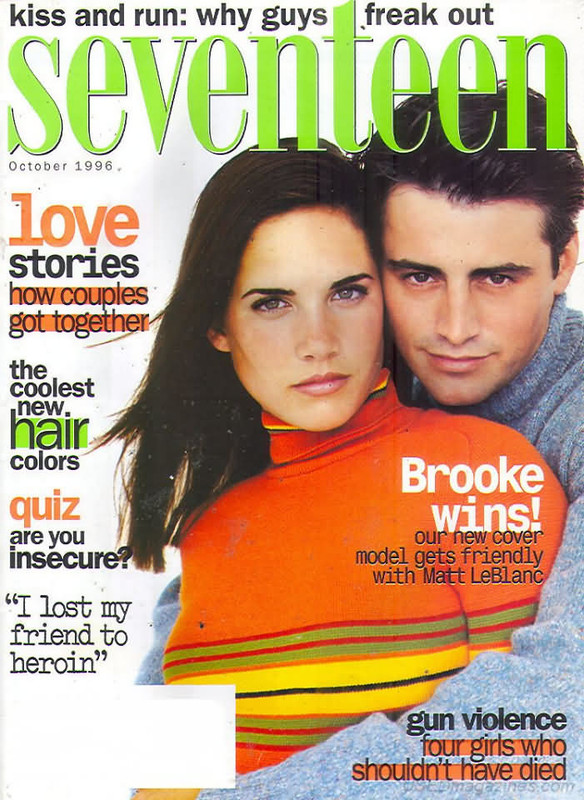 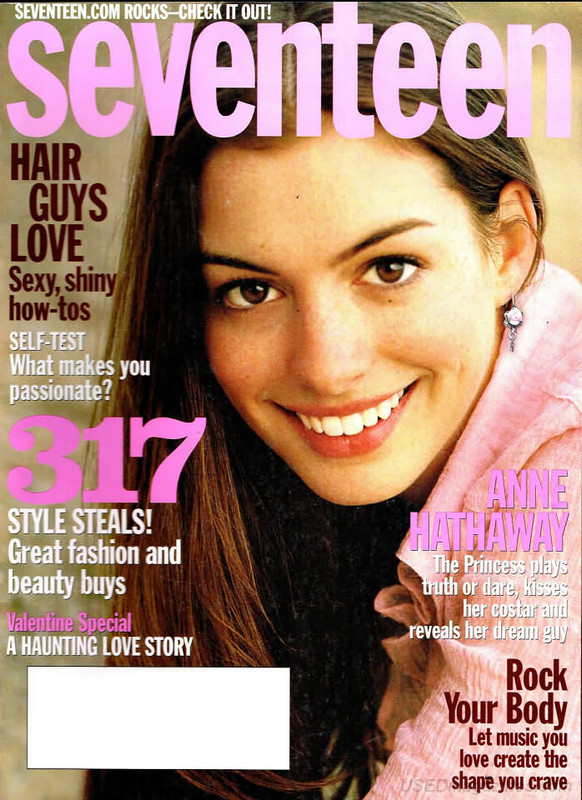 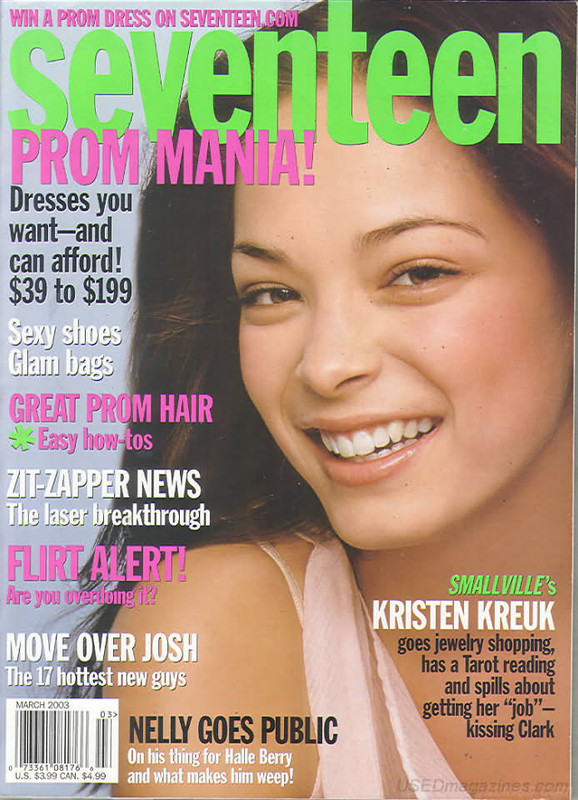 Seventeen's blend of fashion, fitness, celeb features and everyday issues gave my pre-teen self a glimpse into teen life.

I was probably still a little too young to truly understand and appreciate most of the content — I was mostly interested in any mentions of Britney Spears (in the early 2000s, they were frequent), and learning enough about the movies and music everyone else was talking about to hold a conversation with my peers and maybe make some friends (it didn't really help me make friends but it did push my interest in pop culture to obsessive highs, that peaked with my participation in internet stan culture in the following decade).

I loved Teen People and I devoured each issue I recieved cover-to-cover, convinced I would somehow learn the secrets to the universe. As much as I still love teen magazines, I'm not sure they taught me that much. But they actually did teach me a lot about life.

Most teen magazines often included regular features with real experiences from their readers — from the embarrassing story sections that were standard in most of them; to more serious, long-form journalistic pieces about kids going through a number of difficult struggles, like mental illness and eating disorders.

Some of the attempts to cover more serious topics came off as sensationalist, voyeristic entertainment, but when handled right they were actually invaluable. At a time before the internet, when attitudes around these types of issues were very different, these stories helped expose young people to new ideas and attitudes. I would go as far as to say they helped shape an entire generation's awareness and way of thinking on some of these issues.*

Teen People especially became known for their coverage of these types of stories, as well as for featuring everyday young adults as models and contributors. It was part of their mission, and part of what made them stand out on the newsstand from lighter, celeb-centric fare like J-14 and Tiger Beat (though these are iconic titles in their own right). 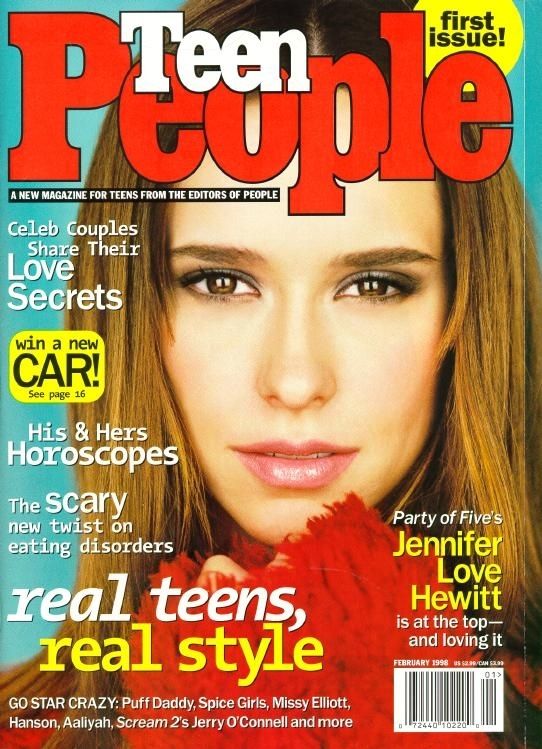 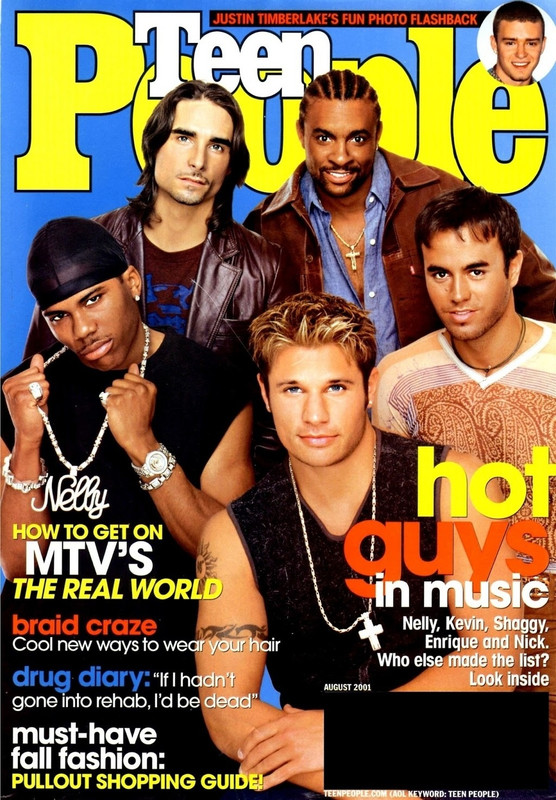 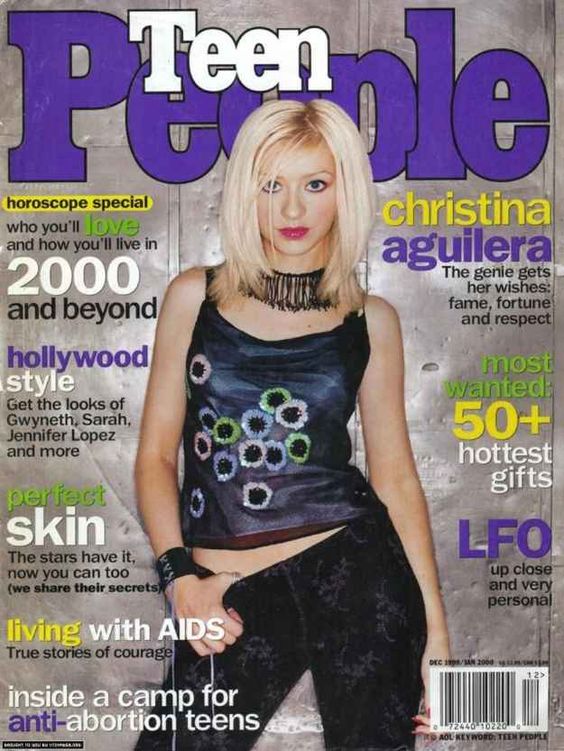 I also loved some of those fluffier teen-targeted titles. M Magazine's title and tagline reflected their media-focused mission — "music, movies and more!" Like Tiger Beat and J-14, aside from the odd advice column and the obligatory embarassing stories, these titles — which were more like tabloids for teens than true fashion or lifestyle magazines — focused mostly on celebrity gossip and popular culture. They also often featured centerfolds and pull-out posters of teen heartthrobs like Jonathan Taylor Thomas and Justin Timberlake, which, as a young queer kid, is honestly was part of why I loved them. 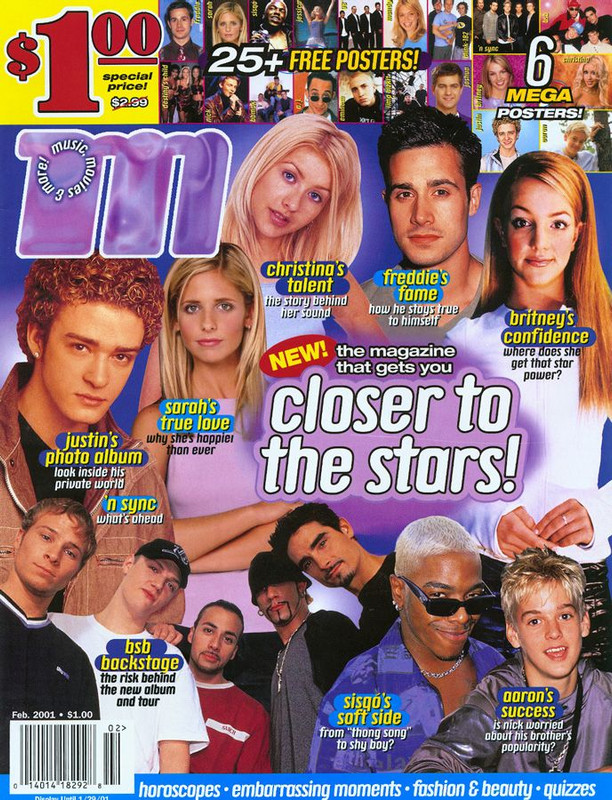 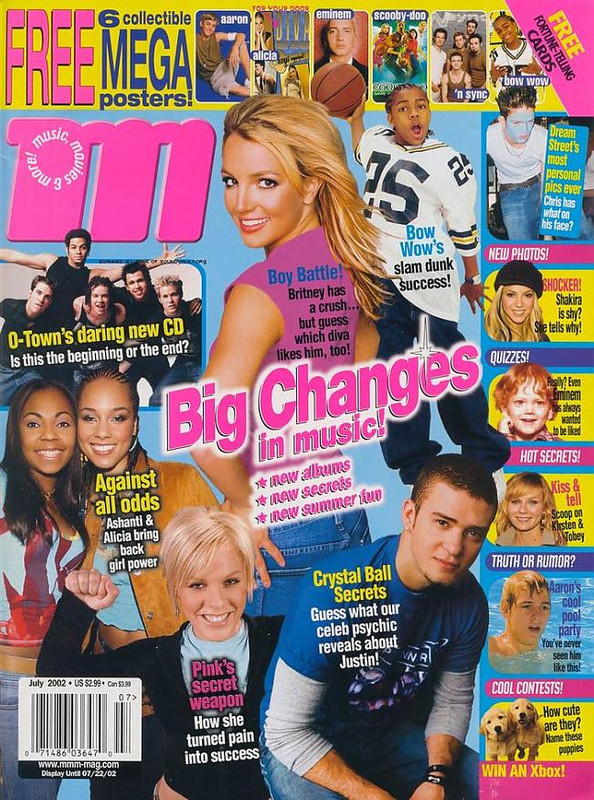 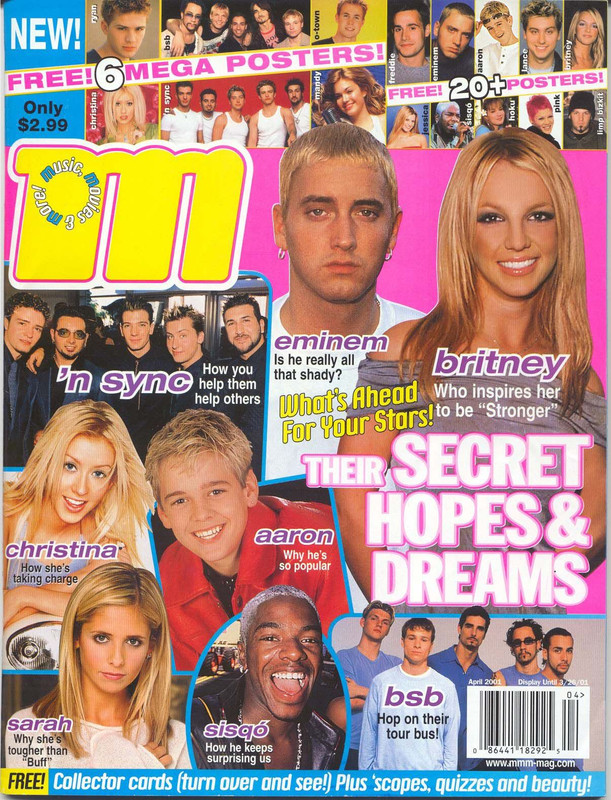 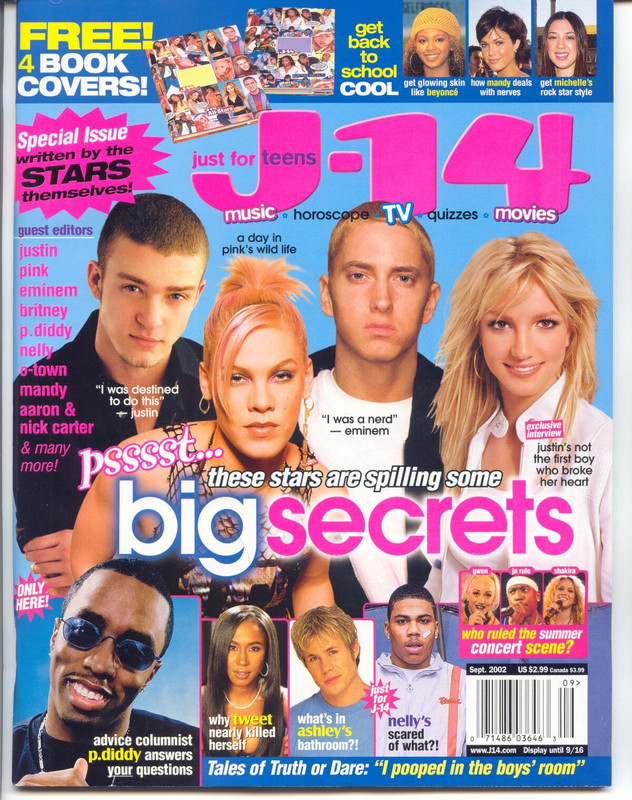 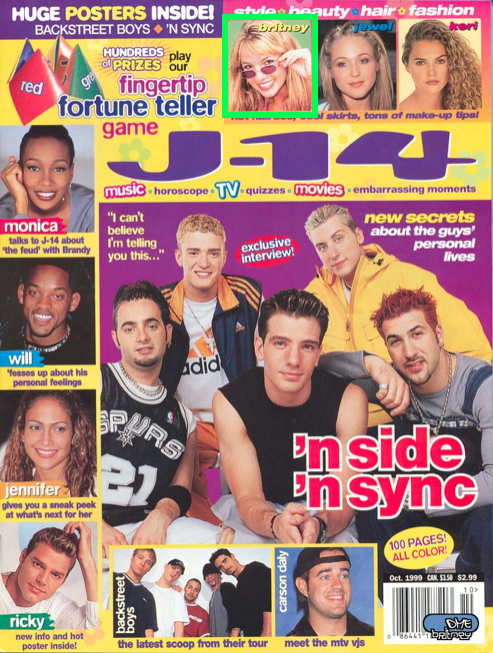 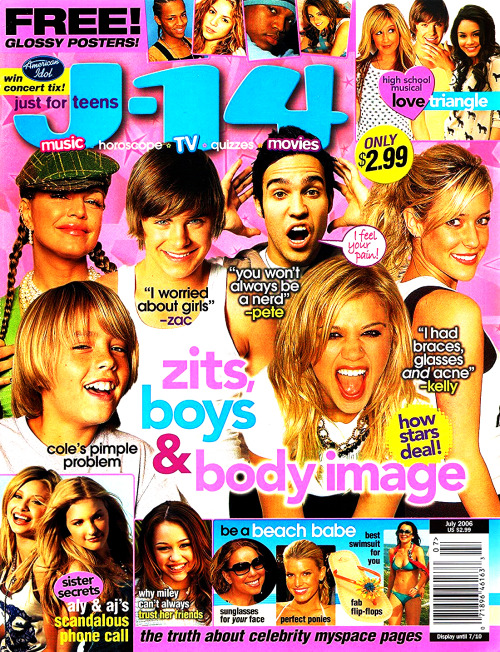 Tabloid-esque titles like M and J-14 promised to get readers "closer to the stars" — focusing on celeb "secrets," news and gossip — and prominently featured pull-out posters and, apparently, puppies. Subjects like body image were touched on, but usually still in the context of celebrities' lives.

Even though critics worried the glossy pages of teen magazines painted a flat portrait of real life, I often felt the opposite. With coverlines that spanned diverse subjects — from fashion, to dating, to celebrities, to serious issues — superimposed over an image of an impossibly gorgeous, perfectly posed teen star, magazines told me not (just) that my life had to measure up to that picture-perfect image — but that, like a good lifestyle magazine, a good life is one that is well-rounded. Even those more tabloid-esque titles included occasional articles with celebrities discussing self-esteem struggles or advice for ambitious teenagers.

Today, the print teen magazine market is virtually non-existent (J-14 is still chugging along as a bi-monhtly publication, and Girls' Life has taken Seventeen's place as the go-to print pub for teen girls), but Teen Vogue received a wave of publicity for their online reporting during the lead-up to the 2017 presidential elections. Reflecting on the publication's top stories of 2016 — which featured articles on glitter nail polish, gaslighting, Netflix and LGBTQ rights — Atlantic writer Sophie Gilbert said in a (now-deleted) tweet, "Girls contain multitudes." Teen Vogue got the credit, but I think teen magazines have always proven that to be true. And as I revisit my favorite teen magazines as an adult, I'm finding new lessons in their pages.

Teen Vogue's top stories of 2016, as featured in Sophie Gilbert's article for The Atlantic.

Though my love of magazines never ceased, in the past few years, I've made a conscious effort to reconnect with my love of the teen magazines of my youth. I follow several Instagram accounts that feature scans of magazines from this era, and have begun my own collection of vintage issues. Part of it is cheap nostalgic escapism into happier times, but like the magazines themselves, it's deeper than that. Sometimes, I still need the reminder to be more well-rounded in my life. Some of the advice in the magazines still rings true. Beyond that, yet perhaps even simpler, is the act of sitting down to read a magazine.

I used to spend hours in my bedroom doing nothing more than admiring the pages of my favorite magazines — not just the aspirational images they contained, but the way the publications were designed, organized and written. That appreciation turned to ambition when I went to school for journalism, with dreams of being the editor-in-chief of my own magazine someday. But by the time I graduated, websites like BuzzFeed and social media apps took the place of magazines in our media landscape.

And yet, now that the inernet is even more ubiquitous, my appreciation for magazines has deepend and I'm reminded of why I fell in love with them in the first place. In today's hyper-connected internet culture, where many of us mindlessly scroll past countless amounts of images and words — desperate to consume the maximum amount of information possible but never really taking anything in — the practice of sitting with a singular title, and exploring and appreciating its finite form — feeling the smooth, glossy pages in my hands as I linger on the interesting parts and eventually reach a natural stopping point — is not only a nice way to relax, unwind and disconnect but feels almost radical in our digital age. Like listening to a good CD, it's almost like a form of mindfulness or meditation.

Magazines themselves seem to be taking note — each issue of the most recent editions of Cosmopolitan (not officially a teen magazine, but in some of its iterations, it may as well have been) features the tagline "Magazines: Your solution to screen fatigue" on its spine. While I'm not sure this signals a return to the magazine media boom of the pre-internet days, it makes sense that other people may be appreciating what magazines still have to offer, even in our current context.

But, even if it's just nostalgia talking, I can't help but think there's something special about the teen magazines of the early 2000s. And other people seem to agree — in addition to nostalgic Instagram accounts, there are other spaces popping up online devoted to maintining the memory and spirit of this era of print media.

This section of my website aims to be one of those spaces. Here, I'll pay tribute to my favorite titles and maybe even recapture some of that magic with fresh, original content.

xoxo stevie *I actually think it was an article in one of the issues I received as a part of my Teen People subscription that gave me my first real example of LGBTQ teenagers living openly. I'm happy to have the issue with that article back in my current collection.